TECHO’s chaplain, an engineer with a casual style, charismatic and opinionated, is currently leading a process of internal order of the institution due to the explosive growth it has experienced. Just in Chile, there are 157 people currently working for it.

As the successor of Felipe Berríos, Juan Cristóbal has continued his legacy immersed in a social reality where data speaks for itself. Today, there are 36,000 families living in camps, which equals the complete region of Aysén. In Chile there are 693 camps from which 76% are not connected to the drinking water network, i.e., they don’t have water to cook or to shower. 91% don’t have a regular connection to the sewage system, which brings serious health problems; 48% are not connected to the electrical network. The rate of illiterate people at camps rises up to 12.5%, five times the national rate. 66% of adults have not completed mid-level education and a fourth has not even completed basic education. The percentage of unemployed people rises up to 11%. Furthermore, the jobs they have are informal and, therefore, they are not protected in case of losing them. This is the reality of camps in Chile. 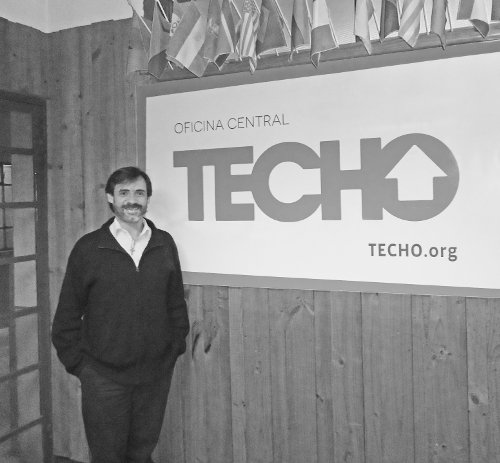 Reviewing this numbers, how has TECHO developed since its beginning until today?

TECHO started in 1997 with a campaign called “Two thousand emergency houses for 2000”, a limited subject related to taking people out of the dirt floor. After a short time, after meeting the prior goal, it was decided to build two thousand emergency houses more. Afterwards, incidentally and unfortunately, an earthquake stroke El Salvador in 2001 and another one took place in Peru. People from TECHO wanted to be present by building emergency houses wherever they could in order to help people at least providing them with a place to live. This is how TECHO started being an international organization. We are currently present in 19 Latin American countries, all except for Cuba, Jamaica, Belize and the Guyanas. We want to establish our parent company in Chile and Carey is helping us in this matter, among others. The firm is also helping us to incorporate a second foundation which will be a sort of international holding. By doing this, we will provide legal structure to something that already exists but will allow us to operate better.

How has TECHO addressed the issue of poverty in Chile?

From the beginning, we understood that emergency houses are not all one needs to stop being poor, since there are deficiencies in other areas of life, not just in relation to housing. Poverty has many dimensions and this is why we have implemented programs based on education, development of work skills, legal clinics and health programs, among others. This is why the need to tackle permanent house rises, as well as to accompany these families in the process. We wondered, why do people go to live at camps? It is like when water flows into a boat. If you have a pump that takes water out the outflow speed must be equal to the inflow speed, otherwise you sink.

“We are currently in a critical situation”

We are currently in a critical situation. We are in urgent need of two solutions: how to make the outflow system faster and in connection to that we have a proposal we can present to the Government, to the Ministry of Housing. The other issue is how we avoid people from entering the camp, because we realize that there are social situations underway that are pushing them towards the latter.

Which are those situations?

There are vulnerabilities to which families are permanently exposed. Some of them relate to low social capital, lack of networks, low schooling, poor work training. All that make a family more vulnerable. When a family is single-parent, it depends strongly on one wage. If the head of the household is fired, this becomes a problem. What we call financial resilience, this is, if the monthly margin between income and expenses is very narrow, or negative, then you are always owing money. Sometimes for those families only one event is enough to end up living in a camp.

When a family settles in a camp, are the urban and social effects of relocating them too complicated?

Exactly, we must be very careful because moving them out means all their support networks change. Chile made serious mistakes, such as in the case of Bajos de Mena, where a great number of families were placed in the same area, far from the city, far from their work, without hospitals, schools, police and firefighters stations. It became a “ghetto” where other kind of social problems arise. We understand that relocation from camps take time, with all the paperwork and formalities recuired. We have witnessed how it takes families over five or six years to get their permanent houses. Its too long!.

What have your achievements been in these twenty years?

We made it possible for 6,925 families to have permanent housing. This is a reason to celebrate. Such amount represents 11% of permanent housing built in Chile since 2007, year in which we started working on this. For a foundation to represent 11% of what is being done in Chile is almost embarrassing.

Is the focus now aimed at developing permanent housing?

Our aim is to build permanent houses. Some time ago we did a campaign called “2010 without camps”. We made a great effort and were really close to achieve the goal, but we didn’t. Chile has currently 36 thousand families living in camps, 6 thousand more in comparison to three years ago. As you may realize, this is a phenomena that has increased since some families lease their houses to raise their income, which is insufficient to cover their expenses. 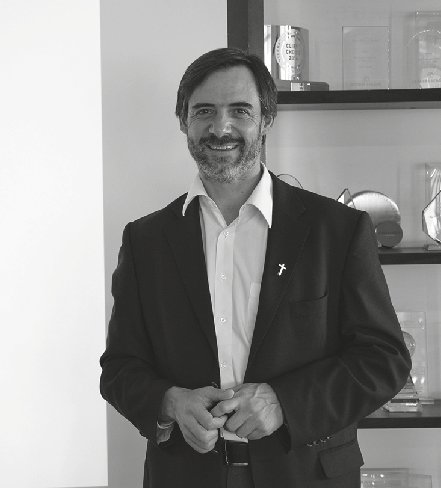 Who else should provide solutions to approach this reality? How has the government been involved?

I don’t want to tie myself down to a specific political preference, but the policy of the former government was quite evil because it delivered subsidy vouchers directly to people for them to choose their housing projects. This was based on the idea that many projects would be completed, but in reality this was a mistake since finally those projects were never built. The government considered the situation of the families with vouchers overcome, but in reality the vouchers represented just a paper that left the people that received them in the same usual conditions.

Another topic that’s worth noticing is that in the recent recount on May 21st, President Bachelet did not mention camps. I have two hypothesis on this: social housing was not mentioned because the government was not advancing as they expected, or this subject was not a priority, or maybe both. We are currently going through a political moment that seeks the universality of rights. The quality of life for Chileans should have improved. But this shouldn’t mean that we stop focusing on some families that have not even reached a minimum living standard. When you propose tuition free undergraduate studies but realize that two thirds of adults have not completed mid-level education, truth is that it is a nice policy, but there are people that have not achieved the prior stage. We need to make policies or strengthen them focused on people that remain left behind.

What role shout companies have to contribute to social justice through Pro Bono work?

We believe that pro bono work and corporate social responsibility are key. It strikes me that this is just being approached. Companies have social responsibility just for being companies. It is a contribution to the social transformation. Companies are starting to set goals not only in respect of their profits, but they are also becoming aware that they must be responsible towards their employees, community and the environment. This relates to a long-term vision.

On pro bono work, here at TECHO we are being supported by Carey, which has been of invaluable help. We are a foundation whose principle is to work with young people, enabling them to make a change. Therefore, we need experienced people that can provide support with their knowledge. For many who are here, this is their first job; they come to learn and, in this sense, contact with specialists is important. We are now organizing the international foundation and it has been key to enjoy the support of a large firm, where different perspectives are put together and all points of views analyzed, at an employment, tax level, etc. Not anyone can provide those services and, in that sense, Carey has been a great ally.