Legal professionals from numerous law firms joined with general counsels from foundation member companies at the offices of Carey to participate in the development of a constitutional education program.

As of December 2019, the Pro Bono Foundation, in alliance with social organizations that work in different areas of development, will implement a legal education program in which it will deliver knowledge to the community to promote informed decision making after the constituent process, whose first stage of citizen participation will be in April 2020 with an entry referendum.

The activity included a welcome from Carey’s partner, Gonzalo Fernández, and the president of the foundation, Pablo Guerrero, who placed special emphasis on the importance of lawyers who will be part of the organization’s program contributing to citizen training both in the use of a language of common understanding and from a technical vision. He also called on them to listen and be part of the different opinions and visions of the people who will attend these talks.

The meeting was divided in two parts: the first, which was led by María Paz Garafulic, had a pedagogical profile with a focus on learning and emotions, with the aim of achieving a good transfer of content and proximity in the talks. The second part focused on constitutional law and the process that will be carried out in the country. It was led Verónica Undurraga, a lawyer and board member of the foundation.

“Currently, there is an excess of information in the environment and at the same time many questions about everything in reference to the constituent process. We believe that lawyers must take an active role in this, training as impartially as possible so that people can participate freely and informally. In that sense, the purpose of the meeting is to all be aligned and prepared for this challenge”, stated Carolina Contreras, executive director of the Pro Bono Foundation.

As part of its objective of supporting civil society, Pro Bono maintains alliances with multiple social organizations to which it provides legal advice and legal education for its beneficiaries. In that context, lawyers lead talks regarding law to diverse groups, including children, adolescents, adults, migrants and entrepreneurs, taking into special consideration matters of interest to these communities. The talks on the constitutional process complement the tax and labor law talks that are aimed at small entrepreneurs affected by the social crisis. Additionally, the “Legal Aid Chile” program provides legal guidance in emergency cases. 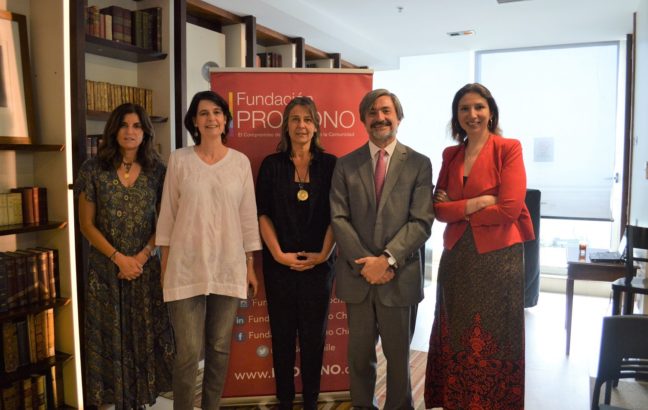 A diverse group of lawyers gathered at Carey’s offices to be part of our legal education program on the constituent process. In partnership with other social organizations, as of December, we will conduct technical talks to address details of this process which begins with the first stage of citizen participation in April 2020.

Together with María Paz Garafulic, counselor for the Pro Bono Foundation, members of the Carey team prepared a workshop that focused on pedagogical aspects of presenting information and engaging with an audience. Verónica Undurraga, who is on the board of the Pro Bono Foundation, addressed constitutional law and the various stages of this new process. 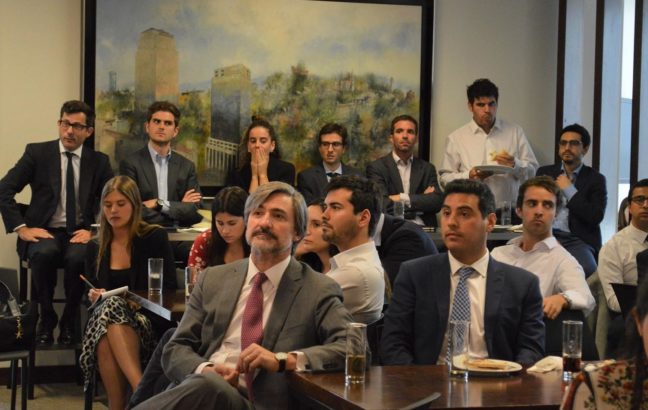 Carey participated in the first event for the new version of the initiative “Arriba Mi Pyme” (Support my SME) organized by the Chilean Economic Development Agency (CORFO), with a pro bono legal advice stand.

This meeting supports micro, small and medium entrepreneurs who have been affected by the recent social unrest, triaging attention to SMEs according to their degree of urgency.

The fair has different stands to meet the main needs of SMEs. We invite those who require tax, corporate, labor or insolvency legal service, to go to our stand on Thursday 21 at Corfo’s offices, located at Moneda 921, 2nd floor, between 9:30am and 13:30 hrs. 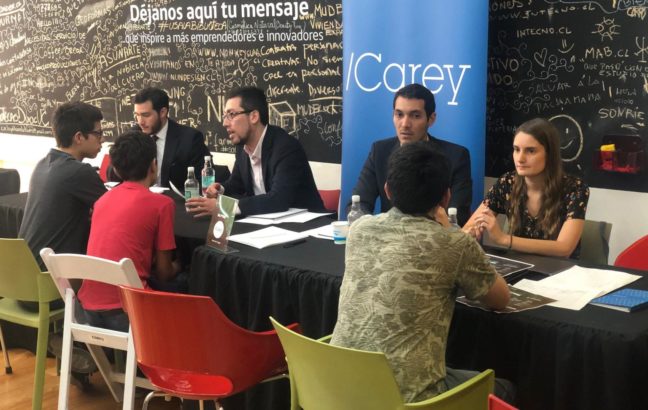 With a new counselor’s participation format, the Pro Bono Foundation held its 2019 Advisory Council meeting, which began with a commitment to hold two sessions annually.

The meeting that took place in the first semester was held in the offices of Guerrero Olivos, and was headed by the foundation’s president, Pablo Guerrero along with the president of the Advisory Council, Pedro Pablo Gutiérrez, and the foundation’s executive director, Carolina Contreras, in addition to the majority of board members. At the meeting, Carolina explained in detail the 27,612 hours of pro bono work reported in 2018 by lawyers from law firms and prosecutor’s offices, which were carried out by 895 professionals (31 average hours per lawyer) registering an increase in both indicators compared to previous years.

She also explained that the aid was provided to a wide spectrum of vulnerable groups, highlighting migrants and people with disabilities.

Regarding the more than 14 areas of law in which the foundation worked, the list was headed by corporate law (74%), labor law (54%), commercial law (54%), inheritance law (43%) and criminal law (40 %). Among the most common legal services provided were the delivery of legal advice (77%), representation in court (74%), modification of statutes (71%), constitution of non-profit organizations (65%) and legal education (63%).

After the presentation, the counselors worked in groups where they evaluated how the foundation functions and the mission and vision of the foundation, with the aim of generating a valuable debate to strengthen its role and define new challenges, upon the commemoration of the organization’s 20-year anniversary.

Each working table had the active participation of a Pro Bono director, who was key in transferring strategic and operational aspects of the organization’s work.

Among the aspects addressed by the counselors were the period of permanence in this position, the renewal and the key role they play within law firms and prosecutors’ offices for encouraging volunteering among their teams. They also discussed the need for the foundation to address new issues and the opportunities offered to young lawyers by including in this work. Participants also discussed challenges in terms of positioning the relationship with law schools throughout the country. 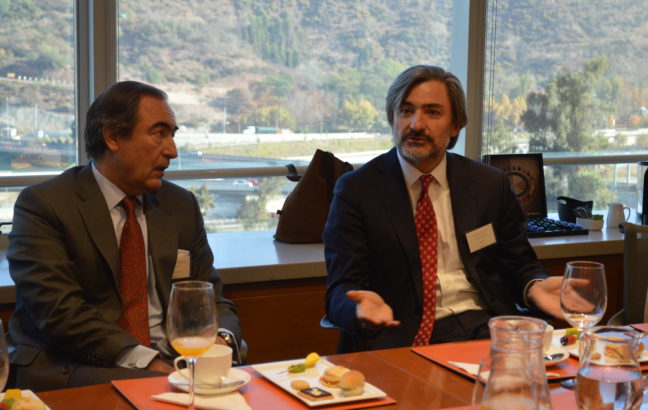 The characteristics and implementation and practical applicability of the Royal Conservation Law and the comparison with its simulation “Conservation Easement” in the United States, Australia and Canada, were the main topics discussed today at Carey during the conversation panel organized by the Pro Bono Foundation and the Tierra Austral Foundation. The event had the special participation of the environmental consultant and professor of the Sustainability Program of the Harvard University Extension School, Henry Tepper, who addressed the international experience in that area. 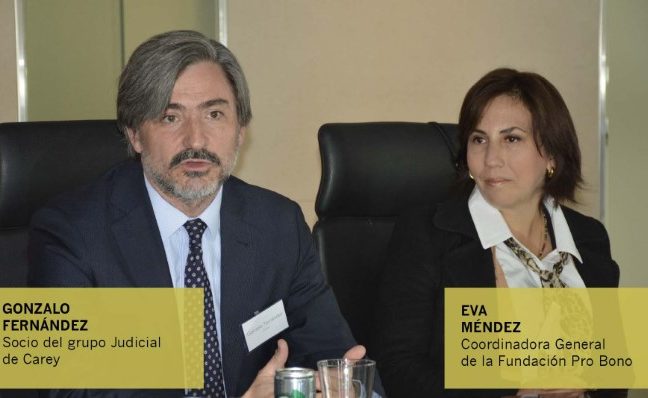 Addressing an important topic for organizations that is often not well understood, Carey gave a lecture on intellectual property, copyright and trademarks to a group of NGOs.

Carey lawyers, Fernando García and Bernardita Dittus, explained the central aspects of these matters at the activity which organized by the Pro Bono Foundation along with the Colunga Foundation. They also addressed the differences between intellectual property and copyright and their different areas of protection, in addition to plagiarism, economic and moral rights, related rights and trademarks.

All the topics discussed generated numerous questions from the attendees, who took full advantage of this opportunity to address their concerns and learn about these issues, which affect them directly in their daily work and efforts towards overcoming poverty. 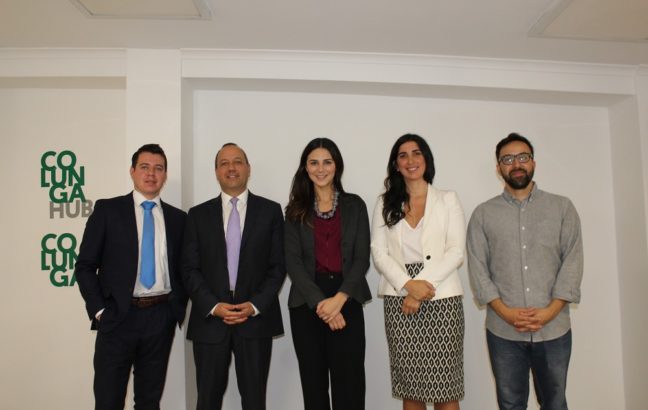 The foundation held its annual Coordinators Meeting, an important opportunity to share visions, experiences and concerns in order to revitalize and strengthen the daily relationship, work and the processes that are part of the pro bono referral cases to law firms and prosecutors’ offices.

The 2018 Pro Bono Foundation performance figures were presented at these meetings, along with addressing those areas of law that have been widely present in the cases taken and those that need strengthening. Also, in both activities a group conversation was carried out to address in detail the difficulties and good practices implemented in law firms, information that was shared with the rest of those who came, at the end of the event.

In that context, Carolina Contreras conveyed how the pro bono work addresses those needs and problems crystallized in Chilean society, for which she presented central data published by the “Country Commitment” program of the Ministry of Social Development. These include 4,910,889 people over the age of 18 who are not studying and have not completed 12 years of schooling in Chile, which directly impacts their access to information and their quality of life. It was also shared that in Chile today, 21.6% of women have been victims of domestic violence in the last 12 months and it takes 7 years to report those abuses. Addtionally, 146,714 older adults dependent on the poorest 40% live alone, and are widely exposed to human rights abuses. This is the reality that the foundation addresses through cases, regarding legal education and a public policy reform.

At the end of these meetings, in which the foundation team participated, the 2018 Pro Bono Report was delivered. 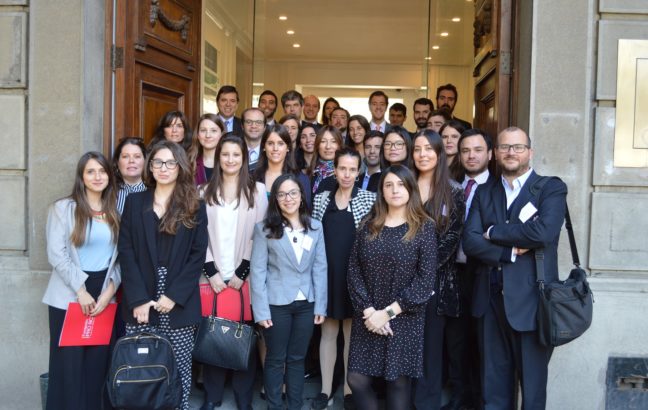 Thanks to the invaluable expertise of law firms and their interest in becoming part of the social and political configuration that determines the quality of life of communities in vulnerable situations, Pro Bono Foundation is participating in various working groups with public bodies and civil society: Labor Code; migration; gray waters and volunteering, revealing their role as articulators and facilitators of public policies. 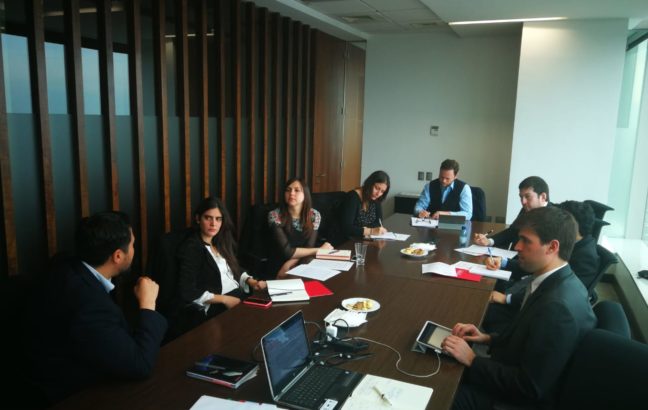 The purpose of the meeting organized by Pro Bono between legal firms and representatives of non-profit organizations was to create a space to share knowledge and look for taxing mechanisms for the cooperation from and to the outside in the civil society.

The kickoff meeting was held at Carey’s offices to what will constitute a cycle of meetings where technical criteria on legal, regulatory and taxing procedures that may affect the organizations upon receiving donations and donating to other entities located abroad will be recorded, talked about and unified.

For the sixth consecutive year, Carey is recognized as Leading Light for its Pro Bono Work during 2017.

The survey, conducted by Latin Lawyer along with the Cyrus R. Vance Center was submitted to a total of 130 law firms from countries such as Argentina, Colombia, Ecuador, Mexico, Bolivia, Brazil, Panama, Paraguay, Peru, Uruguay, Venezuela and Chile. On this occasion, it was recognized the pro bono work of 55 of them.